Hello, being new to OpenMW i have been testing the plugins i usually had enabled when playing Morrowind.

One of them was Protective Guards
http://download.fliggerty.com/download-110-20
That solved the immersion breaking default behaviour of guards never reacting when hostiles npc (i mean like bandits, not NPC you attacked first) where assaulting you right in front of them.
It was especially good with plugins like The Hostiles that spawn bandits group in the wildeness and near cities and.

But as this plugin was dependant on MWSE i learned that it would just never work unfortunately in OpenMW.

After checking for a bit, i found this plugin
http://abitoftaste.altervista.org/morro ... &Itemid=50
That supposedly achieve the same type of logical Guard behaviour but without being MSWE bound.
Unfortunately it does nothing on my test in OpenMW (using The Hostile so there's a bandit group that will spawn near one of the entrance of the couple of caves right next Pelagiad) and Pelagiad numerous guards do not react at any bandit.

As i may have missed the grail of the NPC behaviour plugin somewhere and i'm completely incompetent in scripting so trying to fix anything for OpenMW purpose is beyond me, is there any alternative that actually work in OpenMW ?
Top

OpenMW parses used variables based on the script source and not script variable table subrecord, and one of the scripts only has the main variable declared in that table, so the script ends up being partially broken. Add "float t1" line to the beginning of ab01guardsOnLoadScript (after begin statement) to fix it.

Note that PC reputation needs to be greater than or equal to 5.
Top

Thank you, i added the float t1 to the ab01guardsOnLoadScript

Then once in OpenMW, did a

After reaching the Pelagiad area and attracting one of the bandit that spawned around, i was running around the several guards in Pelagiad for a few minutes with the bandit right on my tracks, even let the bandit hit me once (risky as level 1 character aren't very resilient) and still nothing the guards were just walking around.
After another couple of minute of me running around, for reason suddenly all the guards on location decided to finally attack the hostile NPC. 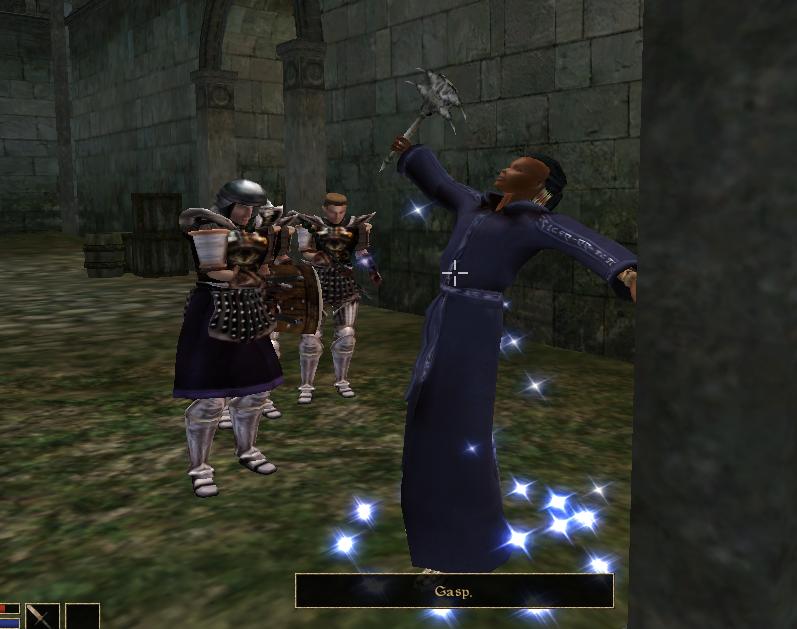 Poor bugger never stood a chance with 3 guards attacking him.
So unfortunately it's not as good as Protective Guards was (as the guards will attack on sight when there's a bandit they see), but at least even with this very odd delayed reaction (as the condition of that reaction is still obscure to me), they can finally react.