All I find are dead links, it either redirects me to older posts, or 404's on everything, I'm running it on the OnePlus 5t, so I have xArm 64 architecture, so I'm not sure if this will help me anyway, I do thank you for the response though
Top

Error 404 because you not login
Top

My face is palmed... Thank you for the assistance once again
Top

Detharias wrote: ↑
09 Sep 2018, 05:55
I don't want to be that guy, but I've seen development updates, and various other additions to the engine, and the Android port was getting weekly, if not daily, updates, and it stopped really abruptly in April, any new on the Android side of updates, or, if I'm just dumb, an instruction on how to compile an Android update out of files from the Windows nightly updates?

last commit was june 18th . and no im not sure how to compile it, launcher needs to be java and the libs would obviously be different . was thinking the same thing but i checked out the pc update and theres isnt anything new. the shadows still dont work. really whats left to do ? the app is solid. the default settings are the issue. things need to be deleted and that was what the dev did on the 18th. some 200 plus files which is usually done when your cleaning up for release.
Top

Dragothor wrote: ↑
05 Sep 2018, 18:09
I found one other mention of the disappearing mouse issue, but it their fix doesn't seem to have any effect on me. Has anyone else had an issue with the mouse cursor disappearing when moving on certain areas of the screen? I'm on an lg v20, game was working beautifully for days and then this issue happened again, I though I fixed it before when I changed the graphics to glesv2 and it worked fine, but now I haven't changed a thing it just randomly started doing it again. Any suggestions would be greatly appreciated.

is the hide controls option checked? if so uncheck and manually hide the controls individually if not ....i need more information and im not thinking the game log will help. do you know how to debug an app via adb ? is this an option, you need a pc. the graphics libs shouldnt have any effect on the controls. yeah if you didnt check hide controls im not sure and it would be pointless to guess. need more info. i wonder if hidden controls could be blocking mouse input but why would it disapear. can you screenshot what your talking about? im using a ps 4 controller i know people had issues with mouse not working when not in menu but that doesnt sound like what your talking about.
Top

its not a new update. its version 0.40 . the current version is 0.43. and its for any archetecture not just armv8. its just a reposted older version of the app. want some malware use 4shared.
Top 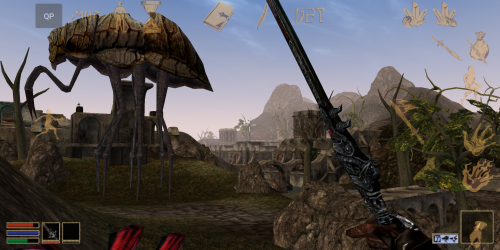 really? then my device package browser is lying to me. it says version 0.40. ill look again if you insist but, i already downloaded it when i saw your post. yeah man, it clearly says 0.40. there is what appears to be armv8 build i missed but it is also 0.40. the date states it was uploaded in September. the armv8 copy was compiled by someone else, but it still the older build according to version history. its xyyz build not a fork, just recompiled for armv8. i cant see how compiling for 64bit when it was universal would help and theres no changelog but there wouldnt be if you didnt change anything. my earlier statement of there being no armv8 build is incorrect but, on the matter of it being build 0.44, not according to version history.
the name SandStranger does however ring a bell. but that isnt who compiled it according to the site, says xyyz for the universal and sylar for armv8. im trying to place the name .....im pretty sure it was a while back, before the ok had been given to go ahead with the mobile port for bethesda so nothing ever became of it, but the name maybe connected to the original shows in forks. but if he did make the armv8 build he for some reason didnt use his github account for the project and he didnt take credit for compiling. the person who did take credit....hang on i forgot i saw him too. i was mistaken he wasnt one of the original project devs and sandstranger does have a github page open with a fork of the project but he has yet to add any commits, its just xyyz's source .
Top
Post Reply
509 posts