Any news on this? Seemed to go quiet all of a sudden.
Top

What is Skyrim-style grass? Isn't is still the same patchy shit as Oblivion?
Top

What is Skyrim-style grass? Isn't is still the same patchy shit as Oblivion?

Yes, but worse (I find Skyrim's grass to be patchier and less 'full' than Oblivion). I'd prefer to see procedural grass, rather than placed grass models.
Top

Me, too. Outerra is pretty good like that.
Top

Okay, people, I think it's time to set this in motion.
I switched all registered users to different group, so you can now start picking your claims.
There are some meshes already claimed, or finished, so you can take a look at them.
Please start with higher priority ones first. Also if you know about some replacer mod, that has meshes in a quality we need, mention it here or on the database forum.

The guideline here is perfectly valid, so make sure you read it.
If you have some questions, feel free to ask.
Good luck!
Top

Thought I should mention Skies , which replaces the mesh and texture for the skies (and a few other things)
http://www.nexusmods.com/morrowind/mods/21960/?

Makes a huge difference in the overall visual experience. You need to go to a forum post (link in the post section of the mod) to get the latest version. The screenshots doesn't make it justice, it's really gorgeous in game.
Top

Sorry guys, haven't had the time to learn blender properly yet. Have installed everything I need though.

Just wanted to pop in with a link to this:

Especially interesting is the license:

"All meshes and esp-files from the mod can be used anywhere without asking, but you must remember that it is only an alpha-version, and stay tuned."
Normal mapped texture replacers, exclusive for OpenMW:
My Nexus page
Top

There is also http://www.nexusmods.com/morrowind/mods/38170/? which has a good licence, and perhaps these two would like to join the project.
Arch Linux - rolling release, always up to date, often partly broken.
Top

I suppose I should chime in here, just to demonstrate further interest.

Back when I saw the first video demonstrating spec/normal maps in OMW, I set out on a short-lived quest to modernize the "Misc" meshes/textures folders. At the time, my only baking/texturing tool was Blender, so I burnt myself out on the idea before making anything more than this updated kwama egg. As you can see, my goal was not to make "hi-res" copies of the originals, but to take what was there and make "next gen" sense of it; e.g., rather than copying the original diffuse texture, I decided to incorporate the funky coloration as an oil-slicky spec map. 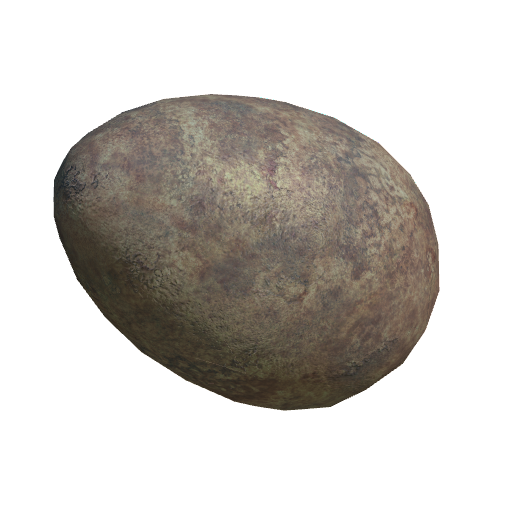 Currently armed with the Substance suite, and seeing that there's an interest in achieving what was my eventual goal, I'm eager to resume work, though I can't at all predict when. Got a full time job, and on top of that I've already committed to a professional game project. Once I've brought that project to a certain rate of production, though, I can totally justify taking time on the side to modernize some MW assets.


In case it should pique anyone's curiosity, I did make a complete set of revamped Dwemer meshes way back in the day (like 2009 or something). I still have them lying around, and anyone is free to do with them what they would like, as long as they give credit and link back to my portfolio somewhere (http://www.artstation.com/artist/blendroid).