Everything about development and the OpenMW source code.
Post Reply
6 posts • Page 1 of 1

This is an idea for a feature that I never got to. Basically, someone made an awesome OSG library called EffectCompositor that allows one to write postprocessing effects in a text file.

The simplest way to use it would be to allow users to activate/deactivate effects that they drop into their OpenMW folder via a settings file. Once that's working, we could think about things like:

- Allow modders to use effects in specific cells, maybe by having an object use an effect file as a model. The effect will (de)activate when the model (un)loads.
- Allow scripts to modify effect parameters.
- Figure out how to share a render target between effects, for things like SSAO and other depth-based effects.
- Add some engine hooks that will allow one to create deferred shading systems as an effect file.

Could they be built into omwaddons and configurable in the CS? It'd be really nice to preview them there too!
Top

Ok, I just tried it out. The code seems salvagable, but it needs some more work.

Sample effects can be downloaded from the original repository at osgRecipes. Many of them didn't work for me (either a shader compile error, or just failed silently), but I'm sure they can be fixed (or maybe they'll just work for you). 'nightvision', 'colorgrading' and 'motionblur' were working, at least. Note you have to remove the line

from most effects or else it will mess with the color of OpenMW's skybox.

Currently, the code only supports loading from the filesystem, not our 'virtual filesystem', so the effect files can't be placed in MW data directories or BSA archives. Instead, you have to put them in OpenMW's 'resources' folder. Then, you have to add to your settings.cfg:

I really like their analysis (or debugging) view that shows you the different render targets and a visualization of the inputs/outputs. That should be really handy when writing new effects. 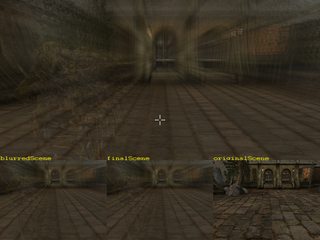 Also, I'm pretty sure the code that updates uniforms has a threading bug, that could cause the uniforms to run a frame ahead sometimes, but that's not really a pressing issue right now.
Top

This is kinda cool. The screenshot looks like the player has taken too much skooma (in a similar idea to when you play fable, and drink too much, and the environment becomes blurry).

ST
100% not a dev, but I know a little about Linux, MW, and scripting. I try to help. LMK if you have any questions.

silentthief wrote: ↑25 Jul 2017, 20:28 This is kinda cool. The screenshot looks like the player has taken too much skooma (in a similar idea to when you play fable, and drink too much, and the environment becomes blurry).

Agreed. I can see lots of uses for this. Thanks for trying this out scrawl!
Normal mapped texture replacers, exclusive for OpenMW:
My Nexus page
Top