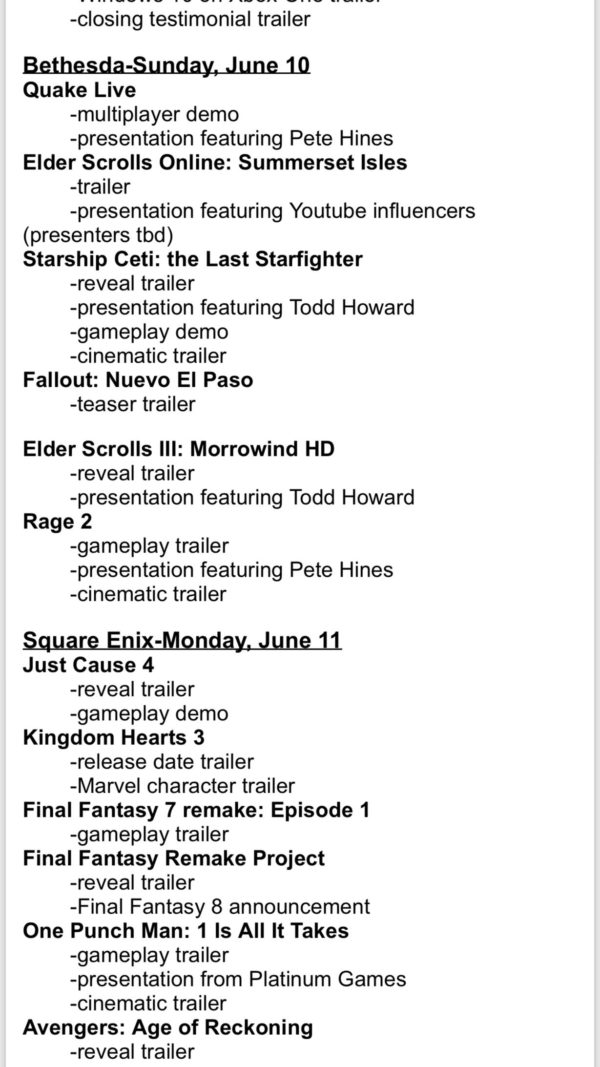 Not sure about the source, my friends posted it today.
Top

I really doubt it.
Top

I doubt it too. But if they would, it would probably be easy to run in through OpenMW. And the higher res textures would be awesome to make normal maps from.

But again. I doubt it.
Normal mapped texture replacers, exclusive for OpenMW:
My Nexus page
Top

Dunno if it's true or not. Time will tell. Though it's probably a fake.
But it would be interesting to look at their HD textures.
Top

If anything, probably a mix-up from the XBox One compatibility release.
Stuart "Sslaxx" Moore.
Top

I don't think Bethesda would be very interested in getting into a trademark dispute given that "The Last Starfighter" is already claimed.

lolwut. They're not even done with the first part of the FF7 remake, which has been having a tumultuous time with almost all of its initial work being scrapped as production moved to another studio, and they're going to start remaking more Final Fantasy games? And one that wasn't very popular, at that?

There's also more on the so-called full listing that just has me shaking my head. "Dragon Age: Rise of Tiamat", which is a "Dungeons and Dragons Collaboration"... why? DA specifically set itself apart from D&D and instead focused on a more ASoIAF-themed setting, what would a collaboration with D&D bring? Especially since D&D is far from its heyday in popularity.

Neir Automata 2, combined with One Punch Man and Bayonetta 3, I really doubt Platinum Games is going to be doing three titles at once since the quality/successes of their games is rather spotty (for every Bayonetta or Neir Automata, you have a Korra or TMNT). At best, NA2 would have to be done by a different studio.

Final Fantasy 15: King's Quest DLC, again, someone doesn't seem to know the concept of trademarks since King's Quest is an already established brand (which had a relatively recent remake/reboot).

And finally, what purpose would it then have served giving Morrowind backwards compatibility recently, if they want to then turn around and sell you an HD version? It would do nothing but eat into the HD version's potential sales. I call bunk.
Top

Neir Automata 2, combined with One Punch Man and Bayonetta 3, I really doubt Platinum Games is going to be doing three titles at once since the quality/successes of their games is rather spotty (for every Bayonetta or Neir Automata, you have a Korra or TMNT). At best, NA2 would have to be done by a different studio.

One Punch Man wouldn't have to be a good game to be accurate. Whenever you're playing as Saitoma you could just press X to win, or maybe press it repeatedly for consecutive regular punches. One Punch Man is about a man's life becoming boring because everything's too easy, so the game could be boring by being too easy, and if it wasn't, then it wouldn't be an accurate portrayal of the series.
AnyOldName3, Master of Shadows
Top

Chris already basically covered this, but before spreading lists like these around you should try first looking down the list and applying at least a modicum of common sense.

For instance: Bungie is not releasing a goddamn Destiny 2 expansion called Ghosts of Nagasaki.
Top

It's set mostly on Earth, isn't it? Just after a bunch of people have died. If ghosts are a thing, I'd expect Nagasaki to have a lot.
AnyOldName3, Master of Shadows
Top
Post Reply
17 posts