OpenMW support for other games: Oblivion, Skyrim, Fallout and more

Feedback on past, current, and future development.
Post Reply
428 posts

anahuj wrote:I don't know reason for "no" but use of later versions of texture files has been forbidden by Bethesda: Oblivion textures/models cannot be used in a Morrowind mod.

OpenMW is not a mod, so this argument doesn't work.

The reason for "no" is that OpenMW is focusing only on Morrowind. Now if you want to fork OpenMW, you're free to extend as you see fit.
My Patreon / Donation Page
Top

All that needs is just support of Oblivion NIFs (or some kind of converter). I think that modders with help of OpenMW can replicate a better Oblivion than Bethesda original. With full customizable role-play system and other cool things.
Top

There is A LOT more than "just" implementing support for Oblivion's version of NIFs.
Top

Dialogue system is different. Quests. Physics. Swordplay/magic is different. Fast travel. Inventory. Worldspace? Some other things too, I bet.

But if you would ignore these things and only go for nifs, then maybe you can build up the world. You wouldn't be able to interact much with anything in the way you do in Morrowind, wouldn't be able to do quests, talk to NPCs, ride horses, etc. Just walk around in air (no land?) and look at things.

Btw. Just so you know, there is a "converter". It's named Blender 2.49 nif scripts, the nif importer/exporter we all love. All you need to do is import all Oblivion models into Blender and export them as Morrowind-compatible nif files. If you try to distribute these files, you might run into legal trouble, though (remember Morroblivion?).

Personally I didn't think Oblivion was so great. If modders are to recreate it better than Bethesda, then maybe they can do it here: http://project-tamriel.com/viewforum.php?f=5
Top

I don't mean "just convert a NIFs, that's all". I suggest use an Oblivion assets as modder's resource and recreate the Cyrodiil with power of OpenMW. And of course "You need a legal copy of Oblivion for use that". 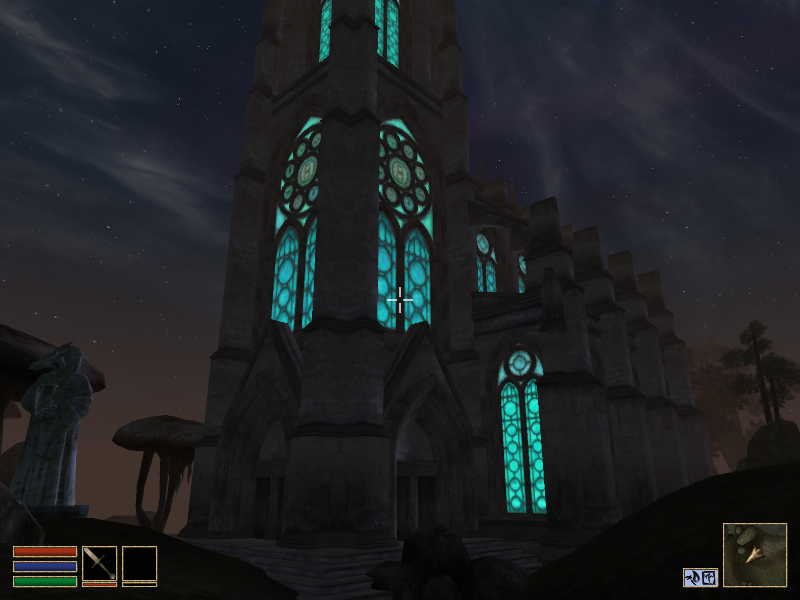 Damn, but that looks good

and there's the province: cyrodiil .... when the modding kicks up there's also gonna be some very likely. scaling according to vvardenfell just makes it gigantic. gold coast itself is size of an azura's coast or some. stirk is thought in the finishing process

probaply multiple ones in the end but you can make portals popping up or say / playsound / streammusic functions should work from dialogue althought haven't tried yet.

getpos coordinates and large randomising to placeitem portal althought for clean one, ability to control coordinates on groups and targeting would be awesome + ability to notice terrain level for positioning statics / containers. but otherwise using animated molag bal's satue as dummy with voices (if somebody other, placing them sound inside the head so to speak with playsound https://www.reddit.com/r/Morrowind/comm ... _you_guys/ (had to)) and moving the portal to ground. then with height check stop that and again with position coordinates using placeitem or placeatme + issuen travel commands for dremora. before individual instance handling doing with uniques or mismatch randomised + unique gears. moving at formation needs dummyobjects and placeatme but marching out is easy for that to randomise or set to certain relative coordinates. then just getsecondspassed and issuing startcombat.

that will compress much in 1.x in scripts but doable anyway

skyrim / oblivion systems are kinda easy then to script from dehardcoding as surface scratch at least as i haven't really played them than bare minimum and cs's own system for dialogue tree building isn't yet implemented or planned^ so ... will see in time

sniper zoom maybe via shaders or it's own camera function.

(edit: i think getting relative angles and then converting them to coordinates in certain distance away in certain direction should be possible in theory with trigonometry (no variable calc limitation) or some other way but haven't minded yet a way)
"life is crazy"
"craziness has beauty which only crazies understand" some movie clip in the head.
https://wiki.openmw.org/index.php?title=Testing
Top

Honestly, it would be more time efficient to fork OpenMW and make it correctly lay out the statics from the Oblivion ESM files, and do the non-trivial amount of work to adapt the scripting, questing, dialogue etc. systems to work with it.

Trying to build it up from scratch is a many years project that the people from province: cyrodiil are trying to do. So I think you'd get more bang for your buck if you just went ahead and recreated the proper engine. But you'd need to clone Scrawl and Zini and make them be interested in the idea - also non-trivial as their clones would probably want to work on OpenMW too

Province: Cyrodiil are trying to create a brand new jungle landmass with new assets. Recreating a classic Cyrodiil with Bethesda assets would be less complex.
Top

The trouble is that the Morrowind Gamebryo engine isn't the same as the Oblivion Gamebryo which is different again from FO3 Gamebryo. The base engine gets modified from one to the next.

I've not looked at the problem particularly, but I'd imagine there'd be significant challenges in unifying them all. If nothing else, the changes to the NIF format between games gives us some insight as to how the game internals are changing.
Top
Post Reply
428 posts