General discussion regarding the OpenMW project.
For technical support, please use the Support subforum.
Locked
84 posts

@natinnet, harassing hobbyists trying to closely recreate Morrowind's engine because the recreation isn't modern enough for your portfolio really misses the point of everything. Why don't you harass every other engine recreation listed here while you're at it?

Beyond that, on a project that has required hundreds of thousands of hours of effort, has recreated Morrowind almost perfectly where every other similar project has failed, and is being provided to you for free in both the libre and gratis senses, your amount of criticism should be commensurate with what you yourself bring to the table for it (hint: you should be the soul of politeness).
Top

yeah, I don't think that people consider that one. The task is huge, monumental, and if it were up to one person alone would take many lifetimes before being to where it is today. There have been more than one attempt at recreation of the Morrowind engine (crystal scrolls, for example) and they all fell due to the considerable task that this is. They point to the other options available, but don't consider the volume of the task.
MSWE/other extenders simply don't work unless you are on windows, but these will be pointed to nonetheless because they are the quicker/easier path currently. I think that MWSE is phenominal, but openmw is the future. Unfortunately there will continue to be nay-sayers until openmw catches up some of the ground that these veteran projects have made.

OH! This was the thread to vent out frustrations on the project!

I want to create a game with OpenMW engine, but the engine keeps being unfinished! The game is actually, imho, lightyears ahead of original Morrowind, I believe I've never crashed a OpenMW release and everything can be played, even multiplayer with TES3MP. There might be some bugs and some things might not be exactly like in original, but the stability and performance feels overwhelming. And it runs perfecly on Linux. As a fan of Morrowind, I'm really happy of this all, and very grateful as a whole, BUT, the editor is still far behind. That really sucks. And it could be so much! In fact, I hate this so much that I used.. I don't know... huge amount of time to learn to code, to contribute. And... I'd still probably be coding shitty code right now if the issues with the editor were easier, if it were not for high production standards that is required of this project. With my coding skills, making useful contributions requires enormous amounts of time, although I got to the point where things were starting to proceed faster, but then, I got busy with my actual work, and have so little time that contributing became impossible for the time being. I guess the reason why OpenMW is so good as it is, is because of high production standards, but I have actually coded a lot of useful stuff that's not currently implemented in any release (including land shape editing and the base for land data scaling), and it's frustrating that my code isn't yet available, though I understand why, as it isn't yet complete, or there are fundamental issues that require solving before they can be properly implemented. I'd really like to see things going on faster on the editor side, but I feel really shitty about giving hate towards any of the actual people contributing, because there are actually some pretty skilled people working on this, and the value of those contributions is insane and comes for free (not speaking of the monetary value, but more like inherent value to this open source project). So.. I don't know. Venting, end.
Top

Okay, the argument "we are hobbyists, so don't abuse us" sucks, because you already ask people for money on Patreon. I don't think, that community donates too much, though. Because you ignore them

The argument "wiki describes Morrowind vanilla behaviour, bla, bla, bla" sucks, because, you know, there are some industry standards. I mean, modern standards. Nope, don't speak about Bethesda games - they already got their portion of jokes about using Morrowind engine in Fallout 86. And squares on the noses in Skyrim... And Oblivion plastic faces... Because the Bethesda games are the refugium of obsolete and exotic solutions, but Marmoset Toolbag is one of the industry standards. Yes, your wiki sucks, as your arguments.

The argument "the engine will never be released if we begin to add new features before 1.0" sucks for 2 reasons:
1) It might work, but you have rivals like MGEXE, MCP etc. They already give much more options both for players and modders. You are just useless.
2) You dislike "negativity", yep? I think you will dislike indifference even more. Old devs will leave the project, it's a normal process. But the new ones will go to your rivals, not to you. So it looks like OpenMW will never be released in this case too

Actually, it's the point of no return now: you can continue to ignore users - and you won't get even "negativity", just no reaction at all. Or you can try to change the opinion of the Morrowind modding community - and you already have understood, what the community thinks about you and your project. The current state of your "Example Suite" is a perfect illustration of this opinion. At least, the opinion of the artists of the community. Because this project now is a real crap, pardon me my French. The artists already ignore you, just like you ignore them. It's honest, isn't it?

And yep, shadows were "almost here" when your project used Ogre. So this argument is the same

The argument "you didn't donate anything" is quite relevant, after all

Because now I'm really not going to donate you anything. I could donate to you a character mesh, but now I won't do it

P.S. It looks like your engine has some problems with polygon normals. I mean, accidentally, the faces with smoothing group 2 were flipped in that mesh, screen from the Morrowind engine: 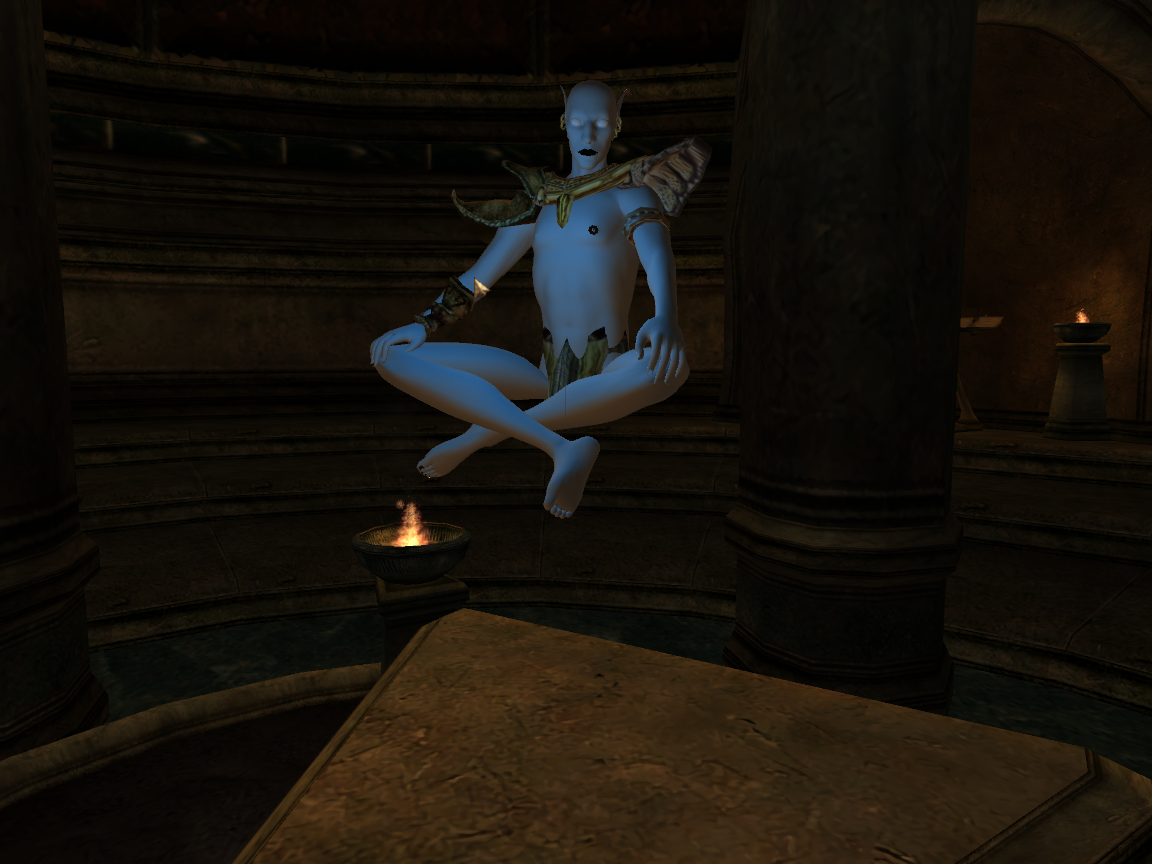 What did you speak about "emulating vanilla Morrowind behaviour"?

P.P.S. I'm going to finish this mesh at the New Year's holidays. So I make you a Christmas gift, though you were bad boys in this year: you still can get this mesh with all source files. Maybe. If you will be able to implement at least shadows and subsurface scattering in this year. Even in non-stable version. I know, I know, I'm too generous to yuo... But the Christian God tells us to be kind to our neighbour...
Top

natinnet wrote: ↑
24 Nov 2018, 03:42
It might work, but you have rivals like MGEXE, MCP etc. They already give much more options both for players and modders. You are just useless.

OpenMW has a different auditory:
1. Linux and Mac users. "MGEXE, MCP etc" just do not work for us, but we do not claim "rivals" useless.
2. Multiplayer gamers. "Rivals" do not have multiplayer at all.
3. Users with low-end hardware. On many setups OpenMW is faster than Morrowind, even without MGEXE.

Because now I'm really not going to donate you anything. I could donate to you a character mesh, but now I won't do it

We do not need your mesh at all. And since you make it not for Morrowind community, but just for your portfolio, we can safely claim your useless too. Just move along.

P.S. A lot of smiles in a post is not good. Are you okay?
Top

AnyOldName3 started his patreon like a few months ago and never really made any advertisement for it. That's it, no one else. Scrawl did receive a few hundred € every month however. And with it, he changed the entire rendering engine in like a few months all by himself. He also added a water shader, normal mapping, specular mapping and parallax mapping during this time.

Doesn't matter what the "industry standard" is. Yes, Bethesda makes bad design decisions, we know, but it's the game engine we're re-creating.

MGEXE and MCP began at OpenMW's actual 1.0. I say no more.

Shadows were already done when Ogre were used. Download 0.36 and see. Shadows are there, and they had been for a while at that point.

What's your point in this anyway? No one of us even agrees with your points, so it's not like anyone gets "sad" or anything. If we eventually ban you, it's not because you criticize the project because it's of course fine to criticize. It would be because you're a dick and an obvious troll. Your very disagreeable behavior has only the purpose of trying to make devs here either feel bad or get mad and start flaming you for your own lulz. You will not succeed though because you're too obvious.

That said, if we filter out some of your sarcasm, you might have found a bug or two. Thanks, maybe someone could fix them now.

Anyway, I thought about giving you a forum-warning, but warning someone like you probably does not matter. You obviously don't even want to be here anyway except for trolling reasons.
Normal mapped texture replacers, exclusive for OpenMW:
My Nexus page
Top

Well, yes, it all boils down to exactly what wareya said.
Normal mapped texture replacers, exclusive for OpenMW:
My Nexus page
Top

Why should natinnet be banned? As far as I am concerned, the trollish antics (the emojis, the written equivalent of grunts and squeaks, the all caps, the bad grammar, the absolute lack of grace, wit or humor, etc.) of a clownish buffoon provides a moderate amount of amusement in a tedious November day like this one.
Top

Anyway, I know you were joking, but to clarify, I never said he was going to get banned. He previously said


P.P.S. Feel free to ban me for the NEGATIVITY!

though, so I just wanted to clarify to anyone here that his "negativity" is not a reason to get banned, but if he eventually gets banned, then it would be because he already has broken wheaton's law into several pieces.
Normal mapped texture replacers, exclusive for OpenMW:
My Nexus page
Top
Locked
84 posts