Repeating test from a week ago, with the recent changes to master. 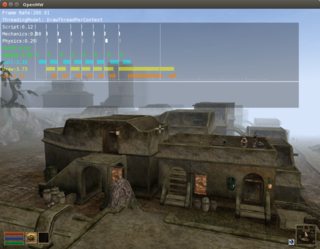 Not too much of an improvement here because we're starting to hit a draw bottleneck. 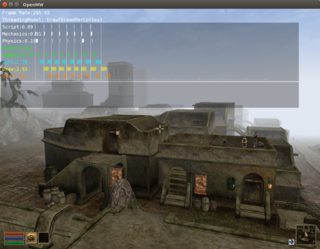 I'm pretty sure we should be faster than vanilla MW by a decent margin now.
Top

So, this isn't technical benchmarks but I do think it shows just how fast the OSG version is considering it's capable of this with my somewhat middling GPU.

I modified my settings.cfg file to force some extra draw distance. Despite this I was still running smooth.

The end result, at least I think (I'm not very programing inclined actually), is the game is forced to generate exponentially more terrain and objects at once without the benefit of LODs or anything of the sort. Is that correct? In any case, despite this my computer is still managing to hold 60fps in most instances with vsync on and drops somewhere to an average in the lower 50's in particularly bad areas like Balmora. Overall still entirely manageable.

OK well i've repeated my tests from 0.36.1 build in comparison to new 0.37. Using the same position as shown in Scrawl's screenshots.

I haven't seen it once drop below 70FPS when roaming around. Very nice job indeed!

I'm genuinely excited about future graphical options with this new engine, for the first time I'm actually able to play Morrowind consistently above 60fps with a bunch of texture packs and trees etc, i'm drooling at the prospect of shadows and distant terrain.

But, there is any reason to go over 60 fps? It is not already much higher than what human eyes can perceive? I am asking because I am not sure.
Top

Higher than 60 fps is not really usefull, but being sure to never go under is pretty appreciable
Top

ezze wrote:But, there is any reason to go over 60 fps? It is not already much higher than what human eyes can perceive? I am asking because I am not sure.

The human eye doesn't work in "frames". Frames are discrete-time samples, while the eye works with continuous light waves that get filtered into brightness and color information for the brain. You can't really measure the way the eye works in terms of a frame rate (though even if you could, it would require hardware that can properly reconstruct continuous signals from discrete-time samples/frames over a period of time, rather than just displaying each frame as it comes in).
Top

A decade ago or so, the US air force did an experiment involving 220 Hz displays to test what the minimum framerate required to fly a fighter jet with a screen instead of a window was. Every pilot could easily identify details in an image flashed for a single frame, so the project was postponed indefinitely until display technology improves enough to try again. The average person may not be as fast as a fighter pilot, but it's not likely that they're a whole four times faster than everyone else (which would be the case if 60 FPS was enough for everyone).

The gist of the arguments that humans can only see at around 20-40 FPS is that individual light receptors in your eyes can only fire around that often, but because you don't actually see in discrete frames, all these receptors are out of sync with each other, and your brain can piece everything together much in the same way as a STAMP camera. (These were in the news a bit ago for recording light travelling at 4.4 trillion frames per second, but they actually work by recording the footage at about 10,000 FPS and then repeating the experiment another 100 million times, starting the camera slightly later each time, letting you display the first frame of each recording, then the second of each and so on.)

As for why movies work (mostly) fine at only 24 FPS, it's because cameras record all the light they receive over nearly a whole 24th of a second, which makes each individual frame pretty blurry if anything's moving, but gives your brain enough information to fill in the blanks (it's not dissimilar to what it'd have to do if you were drunk or very tired). In a game, though, a frame is (almost always) just a single snapshot in time, and doesn't have any motion blur, so it looks more like objects are hopping from point to point, instead of moving smoothly. This can even be enough to make some people nauseous. When rendering graphics for movies, they do so at around 240 FPS, and then blur sets of ten frames together to get rid of this effect, but there's not enough time to do this in real time for games. Some games try and blur objects that are moving, and it can help, but it's not as good looking as doing things properly.

One final tidbit: While I'm not sure how much I believe this, some bungee jumpers have reported being able to see individual milliseconds count up on their watches while in freefall. If this is true, it's yet another crazy thing that adrenaline can do to a person.

Comparing movies and games is apples and oranges. In games you actually control the screen, so you have to deal with something known as "input lag". 60 fps may be enough for a fluid picture, but it's not enough for responsive mouse movement. That is why 120/144hz screens are popular these days. Enabling VSync further increases input lag, since frames have to be buffered up before being displayed, making the difference between 60 fps and 120 fps even more noticable.

Even on monitors that can not display more than 60hz, having the game render more than 60 fps still results in reduced input lag.

Video on the subject.
Top

getting the same performance hiccups as in the 38RC but I found out something interesting. Enabling the water shader doesn't reduce performance when near a lot of water, it somehow reduces performance in the city/town or in major inland areas with a lot on screen. I just started a new game but I'm sure something similar would happen if you were in Balmora

Again I have an amd 8350 and amd 290x OC. 2nd core is maxed out almost all of the time and the only other one that gets significant usage is the 8th core. the other 6 basically don't function in the game at all. I think that there's two problems here:

please let me know if I'm speaking out of my ass or if there isn't a way to solve the issues.
Top
Post Reply
92 posts