General discussion regarding the OpenMW project.
For technical support, please use the Support subforum.
Post Reply
5 posts • Page 1 of 1

I've been noticing NPCs in my test game taking rest poses that look at though they should be in motion. Here's a shot of the lovley Erranil, the guild guide at Ald'ruhn Mages' Guild: 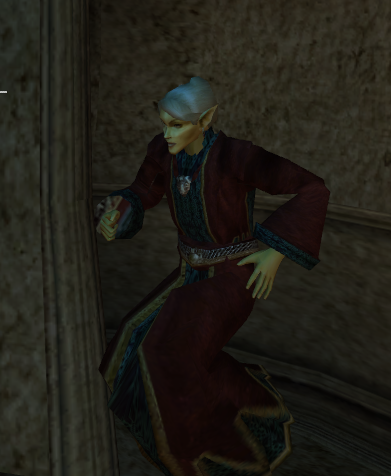 It doesn't happen all the time and it's more noticable with some NPCs than others. Training with Yakin Bael was particularly noticable. He moves around between trainings anyway; sometimes you'd find him doing this. Ra'Virr in Balmora sometimes takes what looks like a mid-pounce pose when you close the barter screen.

Not a major thing, obviously. Just looks a little odd.

Possibly unrelated, but later in the same session, I went to see Creeper. And then couldn't get out. The doors clunked but the scene stayed as it was. So I figured something had spring loose and thought I'd save, quit and reload. Well, that gave me a popup about an Ogre Exception.

I got this lot out of the log file.

I know Ogre is going away with the next release, so I don't expect it'll be cost effective to chase any of that lot down. But it could be the cause of the funny poses if there was some sort of memory corruption going on.

Post crash, I reloaded from the last save I had. As it happens, just before the screeny posed above (and now fixed so it displays properly).

She's still doing it in the reloaded game. Let's see if this session crashes too, I suppose.
Top

It looks to me like a falling/jumping animation, maybe its physics problem? Since she thinks, that she is falling down.
On GitHub as kunesj, on GitLab as kunesj.
OS: Linux Mint 18, CPU: Intel Core i5-3330, RAM: 16GB, GPU: GeForce GTX 650Ti, OpenMW: from source
Top

jirka642 wrote:It looks to me like a falling/jumping animation, maybe its physics problem? Since she thinks, that she is falling down.

That would be consistent with the blast Ogre exceptions and subsequent crash I got shortly after that I suppose.

Oh well, retired that one now. If it happens again with the new char, I'll post.
Top

@DocClox
The first error reported in you log is this:

Can't create offscreen surface: Ran out of memory in D3D9Device::copyContentsToMemory at B:\Programming\Libraries\Ogre\Source\RenderSystems\Direct3D9\src\OgreD3D9Device.cpp (line 1406)

In my experience, once you run out of memory, you're deep into undefined behaviour territory, and things are pretty much hosed. I.e. the rest of the log is probably noise.
Top

dteviot wrote:@DocClox
In my experience, once you run out of memory, you're deep into undefined behaviour territory, and things are pretty much hosed. I.e. the rest of the log is probably noise.

Fair point. I must admit, I saw "Ogre Exception" and didn't read much further with Ogre was on its way out and all. But yeah, "out of memory" probably explains everything that follows.

As it happens, I had the same error crop up today with a new character. The only common factor that I can think of is that I was using Boots of Blinding Speed plus the Grace of Daring to do some fast cross-country traveling. Like from Vivec to Nchuleftingth and on from there to Sadrith Mora. And then shortly afterwards repeating that to go from Ald'ruhn to Maelkeshi and on to Gnisis.

So, I guess if there was a memory leak, that would be a good way to flush it out. If nothing else, maybe we got a good stress test out of this.
Top
Post Reply
5 posts • Page 1 of 1