Feedback on past, current, and future development.
Post Reply
6 posts • Page 1 of 1

IIRC, OpenMW uses Rag Doll physics, so I want no get use of this feature too by kicking butts of my dead enemies and watch how they are rolling around. Also I wish to open interior doors with such kick or a punch.
On alive enemy kick should have the same effect as a punch, but harder.

Sometimes just killing your enemies is not enough, and, I think, everybody wants to have the possibility to kick the corpse of forking Cliff Racers straight to the stratosphere.
Top

Did I miss something? Last time I checked, physics was a pretty dumb in both Morrowind and OpenMW.
Top

I think OpenMW has the possibility for better physics, but it hasn't been implemented.
Stuart "Sslaxx" Moore.
Top

I saw that there is quite a back and forth on the "post 1.0 planning update" topic here -> viewtopic.php?f=20&t=5075 and I did not want to throw this request there because it might muddy the water, but saw this request for one of the better features that Oblivion has - the (I think physics?) ability to move actors bodies when they die, and I deleted my old post (duplicating this request) and instead copied my text/image here.

I know this is way off from anything that is not actually trying to make an OpenOB oblivion recreation, and thus this is so far off of the planning spectrum that its been touched only slightly. So, this is most likely a "pipe dream" for the time being. However,the ability to move the body of creatures/NPCs has merit, when you consider stuff like the pic I added to this post as an attachment, or if you wanted to make some kind of AI/script that takes dead bodies into account (like if you have ever played any of the "Tom Clancy - Rainbow 6" games, you had to hide bodies or guards would see them and then raise the alarm). 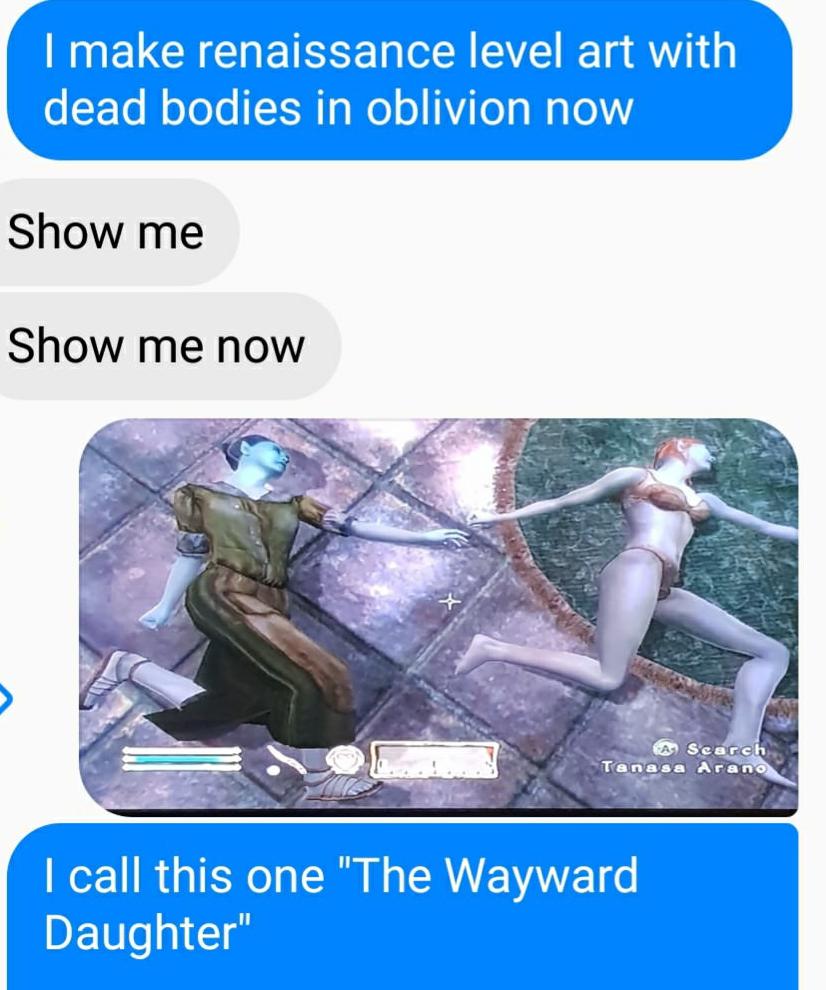 While I don't expect my request to be taken any time soon. Here's to dreaming.

ST the dreamer
(EDIT - removed the vulgar text at bottom of image - not relevant or necessary)
"You like to dance close to the fire, don't you?."
Top

Improved and ragdoll physics including dead bodies definitely a want by me too. From putting buckets on NPCs' heads to playing basketball with cabbage, it adds a ton of fun and potential for self-imposed goals, which I always appreciate greatly in games.
Top
Post Reply
6 posts • Page 1 of 1