Feedback on past, current, and future development.
Post Reply
8 posts • Page 1 of 1

Back in the day in Vanilla Morrowind I used to resize the character window so it only showed the Health, Magicka and Endurance bars. I'd pin it down and drag it somewhere on the screen out of the way. This was kinda handy because it meant you could see the numbers during combat. See screenshot: 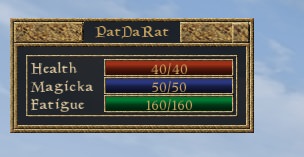 But in OpenMW I noticed that the scaling of the UI elements works a bit different, and so it looks like this when I resize:

It's pretty small thing, but I thought I'd mention it as it's a minor deviation in behaviour from Vanilla Morrowind.
Top

It's pretty small thing, but I thought I'd mention it as it's a minor deviation in behaviour from Vanilla Morrowind.

Seems relevant to me, thanks for sharing.

Hmm, looks like a simple fix would be to put minimum sizes on some of the boxes. I don't know if MyGui supports that or not...
Top

It is possible to set a minimum size of window via MinSize property, but it does not work for a single widget.

So we would require to patch the MyGUI or add some hacks on engine level to fix this bug.
Last edited by akortunov on 24 Dec 2017, 06:45, edited 2 times in total.
Top

Did a ticket get created for this? If not, I think it will be forgotten.
Top

I'm not aware of any ticket created for this. I'm not sure how to create a ticket; is this something Drummyfish can do?
Top

Any user can create a ticket on the Bugs page of the site (I can't remember if it requires a separate account though). Only users who an admin approves as "developers" can edit the tickets, but anybody can file them, so go ahead and take care of it.
Top

Thanks Thunderforge, bug has been submitted: