Everything about development and the OpenMW source code.
Post Reply
8 posts • Page 1 of 1

Firstly, I want to thank all of the OpenMW Team, you're all awesome. I've been enthusiastically watching this project since v0.23 and check the site, forums and bug tracker everyday, i really enjoy the update videos too. I can't wait for this project to hit v1.0

I've noticed in Morrowind, Oblivion, and Skyrim one thing that's never been done well by mods is guns. From what I can tell they are essentially a crossbow with a custom mesh and projectile, it's cool we can at least have automatic firing (kind of) for gun mods even though all the crossbows (as far as i know) only fire a single projectile at a time before reloading.

However the end result is always a let down just because of the mechanics of the crossbow, it doesn't really translate to a machine gun for example. I'm not putting down the mod authors, the look of the guns can look awesome, but just the way they work, a lack of a proper ammo system using a fixed number of projectiles per clip before reloading, weird reloading animations etc... always results in a somewhat disappointing experience.

I'm guessing this is down to limitations or restrictions within the game engines themselves, Bethesda has nothing to gain from building a gun 'type' of weapon in the game only to never use it, or they don't want people building custom weapons types and doing things like importing all the Fallout 3 weapons into Skyrim for example.

One aspect of OpenMW that excites me is the potential for completely new games to be built on the engine, will it be possible for modders and content creators to build things like new weapon types, real cut-scenes with NPC's walking around, talking and interacting with the environment, 'real' physics, and new features via plugins, which are outside the scope of what features morrowind has and not possible on the stock morrowind engine from bethesda, without making a fork of the OpenMW engine?
Top

This may be better suited to the feature requests and suggestions sub-forum.
Top

Mistahtokyo wrote:This may be better suited to the feature requests and suggestions sub-forum.

Having more realistic guns as a mod in OpenMW would be cool, but my post wasn't specifically about that one feature, I was asking about whether the OpenMW engine will be more extendible and moddable to the extent where functionality in my example could be implemented by modders or whether were still limited to the confines and functionality of the original morrowind game, and any new 'from scratch' games built on the OpenMW engine would be limited to being essentially content replacement but still 'morrowind' behind all that new content?

Apologies for any confusion.

you do not know true joy til you modify an imperial crossbow to have speed of 25 and script replenishing crossbow bolts.

it just is OVERKILL

ST
ps, havent tried this in openmw yet, but was fun in vanilla
"You like to dance close to the fire, don't you?."
Top

https://wiki.openmw.org/index.php?title=Wishlist propably not and by the definition goal 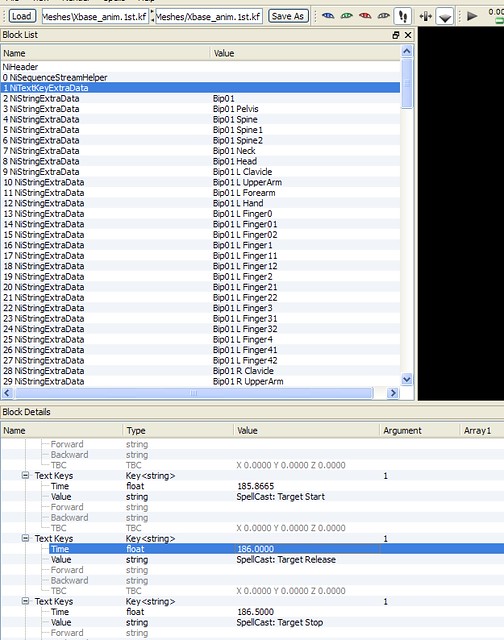 there's also for crossbows little bit down. if gun mods have custom animation then it's just matter of lowering the frame count like with spell cast. some particular gun mod to test .?

how that script would work? .p
"life is crazy"
"craziness has beauty which only crazies understand" some movie clip in the head.
https://wiki.openmw.org/index.php?title=Testing
Top


Thank you for the feedback sjek, I don't really know much about modding the TES games so some of what you wrote was a bit over my head

I know it's possible to mod an existing weapon, change it's textures, fire rate, mesh, sounds etc.., I didn't know you could change the 'reload' animation for things like the crossbow. Why don't more 'gun' mod authors do this, are custom animations difficult to mod into the game?

I've noticed with Skyrim you have to use all that FINS 3rd party stuff for some mods that involve animations, would you need to use something like this to get a custom reload animation?

I was mainly using guns and custom weapons as an example as it's a class weapon that (as far as i know) has never been in any of the TES games (not counting the cross-bow), my question was more about whether you could create completely new, from scratch, custom everything, classes of weapons via mods or openmw plugins, either for the existing morrowind game, or for a completely custom, from-scratch game built on the OpenMW engine?

If a modder wanted to create a completely from scratch game with the OpenMW engine, for example a war-time / FPS type game, and they wanted the 'gun' weapons in that game to behave completely differently to any of the existing morrowind weapons so it could have features like: Another example that fits into my question (kind of) but would apply more to oblivion and skyrim rather then morrowind, would be custom mounts, i've noticed you can have these in skyrim but most of them are a bit weird, like in some mountable horse-cart mods your player kind of changes to a sitting position and then slides up through the bottom of the cart before you can control the mounted object.

I'm guessing this kind of thing happens because even though you can have 'custom mounts', like a horse with a custom mesh / texture, if you wanted to build something moderately or drastically different to what was in the stock game, e.g an F1 race car, you're never going to get the physics, animations and other details etc.. to look appropriate because F1 race cars were never part of the stock game.

From what I can work out there would be two main routes to achieve the above class of weapon, or something like mountable objects (which as far as i know was never part of morrowind) in the OpenMW engine:
If you could make things like the weapon classes, and many other 'static' elements of Morrowind that are difficult to mod part of your custom game's data files that would be preferable to making a copy of the OpenMW code and then updating it to suit your needs. The Plugin / Data file route would also make any custom games built on the OpenMW engine more moddable too, as well as massively expanding on what modders can do for morrowind, some mods may even be cross-game compatible in the right circumstances.

Would any custom games built with the stock OpenMW engine be limited to content overhauled mod's of morrowind, or could custom games have unique functionality that didn't exist at all in Morrowind without changing the core OpenMW engine's source code?
Top

One of the biggest issues with what you were describing was that it was incredibly hard to make custom animations in MW. The only ways that I know of for doing that was to own an old version of 3DS Max - version 3 or 4, possibly 5. 3DS max 10 is current and the exporter will not work for any of the other versions. Without the "official" exporter, there were some successes with blender - but that is also a hit or miss deal, as that exporter is now for an older version of blender.

I am hoping that openwm will allow for more with the integration of ogre - but there has not been much discussion of additional formats lately, and I think that that talk has been shelved for now while questing for v1.

Anyhow, we are eagerly awaiting the possibility of new custom animations