Not about OpenMW? Just about Morrowind in general? Have some random babble? Kindly direct it here.
Post Reply
27 posts

Building a new rig. I meant to do a post asking for opinions but I jumped the gun and bought everything so lalalala. I already got the RAM, GPU, and PSU from a local shop, and the rest is in the mail.

Here's what I've got:

Mobo: ASUS Maximus VIII Impact
After seeing the Corsair 250D, I decided I wanted to a Mini-ITX build for the first time in my life. I always buy ASUS boards, and this was the best one I could find for what I am trying to do: build a Mini-ITX rig but game on it. I didn't want to skimp here because I wanted to be able to upgrade other components later.
CPU: Intel i3-6100
Decided to save some money here and upgrade it later. It's going to be way better than my Core 2 Duo anyway so it'll do for now... I'm even going to use the stock fan until I upgrade it.
RAM: Corsair Vengeage LPX DDR4 3200 Mhz 2x4GB
Saving some money/planning to upgrade here as well. I would have gotten something even cheaper but this is what my local shop had, so I went for it.
GPU: ASUS GeForce GTX 960 OC 4 GB
This was something I wanted to get now and not have to upgrade later, since I have been using a GT 440 for a few years. I didn't want to spend all my money on a 980 though, so this was a good compromise.
PSU: Corsair RM650i
I wanted an RM550x but my local shop had the RM650i for basically the same price so I got it. I won't use the Corsair Link feature, but otherwise it's the same thing with a bit more juice.
Case: Corsair 250D
This thing looks awesome, and I am super excited for it:
http://www.hardocp.com/article/2014/01/ ... e_review/1
I've always done ATX builds before and been super unhappy with all the wasted space. I only put two internal drives, one optical drive, and one GPU in any build I do, so I really don't need a cavernous case for lots of expansion. This case has the smallness of an ITX case, but is still big enough for the PSU/GPU/cooler etc. If I was building a media PC or a NAS I would probably go for something else (though it seems fine for a NAS if you don't need a ton of drives) but for what I wanted this was perfect.

I'll be salvaging the SSD and HDD from my current machine, as well as all peripherals. For the curious:

The SSD is some HyperX something and the HDD is a 2TB Seagate... I don't remember the specifics and am too lazy to look them up.

Anyway! There ya go.

That's pretty cool, the Core 2 Duo is pretty old now and it sound like a good upgrade. I'm thinking of upgrading as well, but instead of a custom build, I'm thinking of going OEM for a gaming PC and going to Dell and no, not an Alienware, an XPS. I actually compared the baseline XPS to a custom build and the custom build was actually more expensive. (the difference with custom builds is it's more al-la-carte) By the time I have the money, Zen should be out so I'll be enjoying a Zen XPS

One of the big draws of doing a custom build for me is being able to pick the brand of all the components. I guess I could buy a pre-built ASUS since that's what I like to buy anyway, but being able to throw some Corsair stuff in there is worth it for me.
Top

raevol wrote:One of the big draws of doing a custom build for me is being able to pick the brand of all the components. I guess I could buy a pre-built ASUS since that's what I like to buy anyway, but being able to throw some Corsair stuff in there is worth it for me.

Yeah, that's one of the things you miss out on, picking your parts. When an OEM picks a drive, I always assume they're going to be a cheapass and use a seagate that dies easily. I'm guessing I can talk to a sales rep and ask them not to put a seagate in my computer like I can request not to have them install Windows and get reimbursed $100, but ask for a Western Digital upgrade.
Top

It's funny, I hear a lot of people dislike Seagate... they're all I've ever used and the only one that gave me problems was the 2.5 inch USB one that I would throw in the bottom of my bag and smash into things.
Top

It's funny, I hear a lot of people dislike Seagate... they're all I've ever used and the only one that gave me problems was the 2.5 inch USB one that I would throw in the bottom of my bag and smash into things.

Hard drives are a un-lucky bag really, I had 6 Seagates die on me years ago and never used one since but I've heard the same about WD, and I have a 500GB WD thats been running for over 1000 days according to the smart data and never died.
SSDs though, OCZ used to be a scourge. Samsung have never failed me though the non evo or pro drives degrade in performance over time.
Specs: Core i7 8700k @5GHz, EVGA GTX2080ti XC SLI,
32GB RAM @3.2GHz, Windows 10 1803
Top

I was fixing a friend's laptop a bit ago, and he needed to replace his HDD. He'd asked his dad what he was allowed to get, and he'd said anything except a WD as they always break. This seemed odd to me, as I preferentially use WD drives as they're reliable, decently fast, and reasonably priced.
AnyOldName3, Master of Shadows
Top

Must be another emacs/vim thing.
Top

Personal experience is hard to put away, and if you don't try again, you'll never get new experiences. Once bitten, twice shy.

Case in point: HGST drives fail less than WD drives (Seagate at the bottom of the stack). Interesting fact, HGST and WD merged a few years ago, it is only the Chinese that said they had to keep their product line separated. (I work for HGST.) 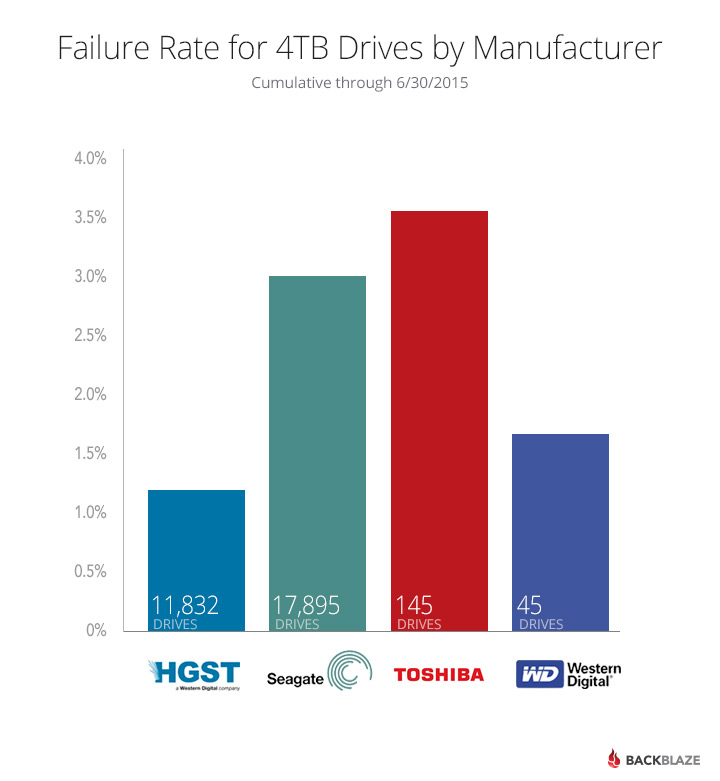